The Berwick Advertiser 9 January 1874, page 2
A Remarkable Series of Robberies
At the Berwick Petty Sessions on Saturday afternoon, William Matthews, seaman, Sallyport, Elizabeth Matthews, his wife, and Jane Matthews, their daughter, were charged with stealing an overcoat, the property of Mr Douglas Rennison, grocer, Church Street; a lady’s dress and pannier, belonging to Mrs Smith, High Street; a dozen loaves of bread, a number of aprons and towels, and a pair of slippers, the property of Mr R. Holmes, Bridge Street; and a waterproof cart cover, together with the border of another, belonging to Mr Tait, Hutton Mill. Supt.Garden said that during the last two or three weeks complaints had been made to him of the thefts, and the girl having pawned the dress, that led to the other articles being discovered in the prisoners’ house. The goods stolen from Mr Holmes had been removed on New Year’s Day. ….
They were remanded until yesterday at half -past ten o’clock when they were brought before the Mayor and A, R, Lowrey Esq, at the New Jail … [continues re: the overcoat, followed by the dress]
The three prisoners were next charged with stealing 9 holland aprons, 2 checked aprons, 2 muslin aprons, 4 towels, 1 brush or broom, 1 pair of slippers, 12 loaves of bread, and 1 pair of stockings from the premises of Mr R. Holmes, fish monger, Bridge Street. Alice Allan, maid servant of Mrs Holmes, identified the articles produced as her master’s and hers. On the evening of the 31st December she brought a bundle of clothes from the mangle, and placed it on the top of a corn-barrel in the kitchen. The bundle contained the aprons, towels, and stockings. She had been baking bread that day, and 21 loaves were made, six being brown and 13 white. Those shown were some of them. She last saw the clothing between three and four o’clock in the afternoon of New Year’s Day, and missed it shortly after she returned at nine o’clock. The loaves were put into the safe, and she saw them before she went out, but twelve of them were away when she came back. She missed the slippers the next day, and those produced were her property. She wore them on New Year’s Day, and left them in the kitchen. The broom was her master’s. She used it on New Year’s Day, and the next day missed it from the back yard, where it was put. Hannah, wife of Mr Ralph Holmes, said part of the property produced was hers. She did not know anything of the theft. Sergeant Davidson said that he got one of the aprons in Gradon’s pawnshop. Both Mr and Mrs Gradon were present. Witness took possession of it. He was previously at the prisoner’s house along with Superintendent Garden and P.C. Gibson and found the other stolen goods. Witness and the Superintendent told the prisoners that they wanted to see what they had in the house, and Mrs Matthews went forward to a drawer and said they would nothing but what belonged to her. He put his hand in a drawer and pulled out one of the aprons. He asked “ What is that?” and she replied, “One of my bed-hangers.” He left the house with that article, and Gibson and witness remained in possession. When he came back he told the prisoners that he would charge them with stealing the property from Mr Holmes’ premises. They then proceeded to search the whole of the house for stolen property. Before this Mrs Matthews said she had seen a bundle lying near the Cock and Lion Inn and went back and took it up. Her husband said, “ Why did you not tell me about these things?” She replied, “I should have done so.” Witness asked where the slippers were, and Mrs Matthews stooped down and pulled them out from beneath the chest of drawers. He then went below the bed and drew out a box without a lid. Before he did so he asked her where the bread was, and she said it was all eaten. When he brought out the box with the six loaves, the husband, who was sitting near the fireside said “That is our baking for the week.” The loaves produced were the same…..
On going back on the Monday they discovered … and the broom in the closet…
Jane wife of Samuel Gradon recognised one of the towels and said that it was wrapped round a bundle consisting of a shirt and a frock, which was brought to the shop by the girl on the evening of the 2nd of January, and pledged by her for 6d. In reply to a question from witness she said her mother sent her. She had seen her hundreds of times in her shop. She gave up the apron to Sergeant Davidson the next day. The husband said he was entirely innocent of everything that had been done. His wife said she had nothing more to say. The prisoners were remanded until Monday.

The Berwick Advertiser 16 January 1874, page 2
Monday before the Mayor
The Extraordinary Cases of Theft
William Matthews, seaman, Elizabeth Matthews, and Jane Matthews, their daughter, were again brought up on remand at the New Jail before the Mayor, charged with theft. Mr W. Weatherhead applied for the liberation of the male prisoner on bail, and two sureties having been obtained, he was released. His wife and the girl were again sent to jail, and all were committed for trial at the next Quarter Sessions.
The Berwick Advertiser 3 April 1874, page 2
Easter Quarter Sessions in Berwick [the theft from Holmes was dealt with first, with much of the information above, repeated]
Mr Ridley addressed the Jury and argued that the male prisoner must have known all about the theft.
Mr Hamilton urged that there was not a tittle of evidence to prove that the husband was a party to the theft.
The Jury retired and on returning found the husband “Not Guilty”
Both prisoners were then charged with stealing the other items.
The Recorder addressing the prisoners said the wife had abused the liberty allowed to her by the Magistrates in letting her out on bail to commit another theft. The habit seemed to have become inveterate and amounted almost to a disease. She might have been sentenced to penal servitude, but he would not award so severe a punishment, although the four offences were so serious that he could not pass them lightly over. It was dreadful to think how she was bringing up her family, and it was for their benefit that she should be taken away from them. She deserved no indulgence whatever, and the sentence of the Court was that she be sentenced to eighteen calendar months imprisonment for stealing the property of Douglas Rennison; and for the other offences she would be incarcerated for eighteen calendar months, but this sentence would run contemporaneously with the other…
With regard to William Matthews, he could hardly believe that he was less to blame than his wife. He had been cursed with a wife who had placed him in very great peril. When he saw the stolen property being brought into his house it was his duty to have stopped it, but he had not done so; and he appeared to be not unwilling that his wife should make money for him in the way she had done. He did not like to send him to prison for so long as his wife, as he had not originated the thefts; but as he did not put a stop to them, when they came under his notice he would sentence him to be confined for 6 calendar months. He hoped the girl would be got into a reformatory and saved from such temptations in future.

The Berwick Advertiser 27 August 1875, page 2
Borough Petty Sessions
Monday [23 August 1875]
Getting Tipsy at other Persons’ Expense
Wm. Gibson [Gilchrist in Scroll Book?], baker, Falkirk, was charged with being drunk and incapable. P.C. Martin averred that on Saturday about seven o’clock he received a complaint of the defendant lying drunk in Messrs Holmes’ yard, Bridge Street. Witness went to the place, indicated and found the man so intoxicated that when raised he could scarcely stand. Gibson was therefore brought to the lock-up. Acting- Sergeant Smith said the defendant had been going about the town begging, and several people were much annoyed by him. Gibson was discharged on promising to leave the town.
[1871 Census Denny, Stirlingshire shows William Gilchrist, apprentice builderliving with John M Allan, Master Baker]

The Berwick Advertiser 15 October 1875, page 2
Borough Petty Sessions
Monday [11 October 1875]
A Reprobate – John Turnbull, labourer, was charged with vagrancy. P.C. Lumden deponed that in consequence of several complaints which had been made, on
Sunday night about twelve o’clock he visited the loft in Bridge Street, belonging to Mr R. Holmes, and there found the defendant lying amongst some hay. The door of the building was fastened, but Turnbull had gone along the roof of an adjoining granary, and wrenched away a board to get in. William Chartres said that he had also found the defendant there on Sunday morning about half-past eight o’clock. Dr Fluker – He was charged with the same offence about a month ago: that must be a favourite spot of his, but it is dangerous for a drunk man to go into such a place with matches. Turnbull said that if the Magistrates excused him this time he would go to Newcastle where his son was. The Mayor – You are determined not to do well, and therefore must suffer 14 days’ imprisonment with hard labour. 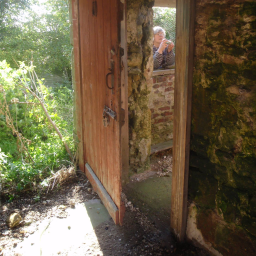